The mortgage industry can breathe a sigh of relief with the final fiscal cliff deal bringing back a popular tax break on mortgage insurance premiums and debt forgiveness for borrowers who go through a short-sale or some other type of debt reduction.

A topic that is still up for discussion and likely to surface later in the year is whether the popular mortgage interest tax deduction will be part of a long-term deficit reduction plan.

Still, the deal passed by the Senate and House on Jan. 1 is one that leaves room for hope in the housing market.

The American Taxpayer Relief Act of 2012 (H.R. 8) apparently extends a law that expired at the end of 2011, which allowed for the deductibility of mortgage insurance premiums, according to a research report from Isaac Boltansky with Compass Point Research & Trading. The law now applies to fiscal years 2012 and 2013.

“The law dictates that eligible borrowers who itemize their federal tax returns and have an adjusted gross income (AGI) of less than $100,000 per year can deduct 100% of their annual mortgage insurance premiums,” Compass Point said.

The following are more items in H.R. 8 that are of interest to housing market:

• Permanently extends the Alternative Minimum patch; again, good for small business owners who are frequently at risk of paying AMT

• Deduction for mortgage insurance extended through the end of 2013; reduces the cost of buying a home when paying PMI or insurance for an FHA or VA- insured mortgage; $110,000 AGI phaseout remains

• Extends the section 25C energy-efficient tax credit for existing homes through the end of 2013; important remodeling market incentive, although the lifetime cap remains at $500.

• Reinstates the Pease/PEP phaseouts for deductions; for married taxpayers with AGI above $300,000 ($250,000 single), the Pease limitation reduces total itemized deductions by 3 percent for the dollar amount of AGI above the thresholds. This is a negative change for some high cost areas, but should only have small impacts. Example, a married household with $350,000 AGI would be $50,000 above the limit and must reduce their Schedule A total by $1,500 raising their taxes by about $500. Only a share of that would be due to the MID.

• Extends the 9percent LIHTC credit rate for allocations through the end of 2013; absent the credit fix, the LIHTC program would suffer a loss of equity investment for affordable housing projects

Also noteworthy are items that are not in H.R. 8, including an itemized deduction cap or a defined fast-track tax reform process. Nonetheless, the return of the Pease rules suggests that items like the mortgage interest deduction will be under debate in 2013.

The resolution of the fiscal cliff now gives way to a series of mini-cliffs due to the need to raise the debt ceiling, establishing government spending levels and deal with the sequester. Over the long run, the future of housing demand, and interest rates in particular, will be affected by how Congress and the President solve the nation’s long-run deficit challenges. 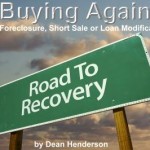 One of the most common questions I get asked these days is how long does someone need to wait before they qualify for a new mortgage if they have experienced a foreclosure, short sale or loan modification in the past?  Currently, mortgage underwriters are treating all of these events the same.

While re-establishing credit and meeting other lending guidelines will be necessary, there are minimum waiting periods for getting new mortgage loans after these significant negative credit events.

These are the most common time frames. There may be some rare exceptions to these timelines. These basic guidelines do not serve as a substitute for a discussion with a mortgage professional about your specific situation.

The waiting period to buy again after a foreclosure, short sale or loan modification is 7 years.  This timeframe may be reduced if the previous short sold property or modified loan was never late and the borrower is putting a large down payment on the new mortgage.  How the previous lender has rated the previous mortgage on the credit report can also have and impact on the waiting period.

The waiting period to buy again after a foreclosure, short sale or loan modification is 3 years.  How the previous lender has rated the previous mortgage on the credit report can have and impact on the waiting period.  FHA does provide some very rare exceptions where the time frame can be reduced which, for example, includes the death of spouse who was the primary wage-earner at the time of the foreclosure, short sale or loan modification.

VA has the shortest waiting period.  The waiting period to buy again after a foreclosure, short sale or loan modification is only 2 years.  If the previously foreclosed property was a VA loan there may be some issues regarding the reinstatement of the veterans full entitlement benefits.  This can be determined when we order a new Certificate of Eligibility from the US Department of Veteran Affairs.

To find out more specific information regarding these guidelines call Dean Henderson at 661-726-9000.

When there is a Short Sale(AKA Pre-Foreclosure Sale) on a HUD, FHA loan, and the new Buyer is also getting a new FHA loan, HUD only allows up to a maximum of 1.0% for Seller’s Concessions or Allowable Closing Costs. If you see the link below, and look at page 2 of 18, the sixth bullet point down, and it is there that you will find this.

HUD will only allow 1% Seller Closing Costs (line 509) and that is ONLY if the buyer is using FHA financing.  Any other buyer financing HUD will allow 0% for an FHA Short Sale.